Butterfly valve belongs to the quarter-turn valve family. It is named after its butterfly disk that acts as the gate to open or close the valve. The butterfly valve has a similar look as theball valve. The advantages of XHVAL butterfly valves include: reliable, easy to operate, and less maintenance required.

REQUEST A QUOTE FOR MORE DETAILS

All You Need To Know About Butterfly Valves

Butterfly valves have discs that act as a gate that opens or closes the flow path. The design makes the valve bidirectional. For many industrial applications, hydraulics do the opening and closing of the valves.

Because this kind of valve is lightweight and costs less, industries that need fluid control use them very often. Additionally, many industries prefer this valve as it is small and easy to operate and maintain. Butterfly valves can be operated manually, pneumatically or electronically. 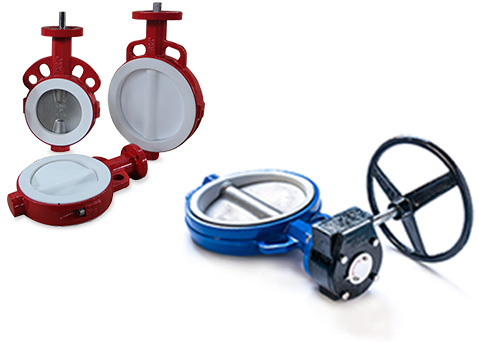 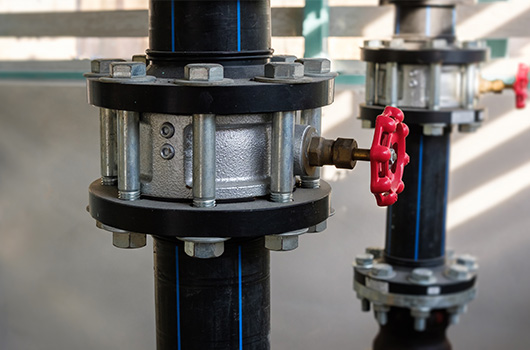 What Are Butterfly Valves Used For?

Butterfly valves are present in almost all industries that need flow control. These could be the following:

Industrial valves have very similar parts and function. While there are minor differences, the major components and their purpose are practically the same. The butterfly valve has four major parts. The designs for each component varies depending on the materials used, the flow media, purpose and the likes.

The body contains the internal parts of the butterfly valve. Depending on the purpose and the media flowing through it, the body can be made of different materials such as brass, stainless steel or PVC. For example, metals are often used when there are high pressure and temperature. On the other hand, for corrosive media, Alloy 20 is often employed because it provides resistance to strong acids such as sulfuric acid.

The disc allows or prohibits the media to pass through the valve. The many variations to the disk provide different degrees of flow control or sealing force.

Together with the disc, the seat forms the anti-leak seal for the butterfly valve. Stopping of the media flow happens when seat surrounding the inner diameter of the body seals the disk. While elastomeric seal such as Teflon is more common, seal materials also include clamp rings, O-ring or a rubber ring.

The stem connects the disc to the actuator, sometimes called the wheel or the handle, depending on the design and orientation. The stem transmits the motion of the handle to the disc. Without it, the actuator cannot manually open or close the disc.

Also called the handle, the actuator controls the opening and closing of the valve from the outside of the valve body. There are three actuator styles designed for safety when a failure occurs: 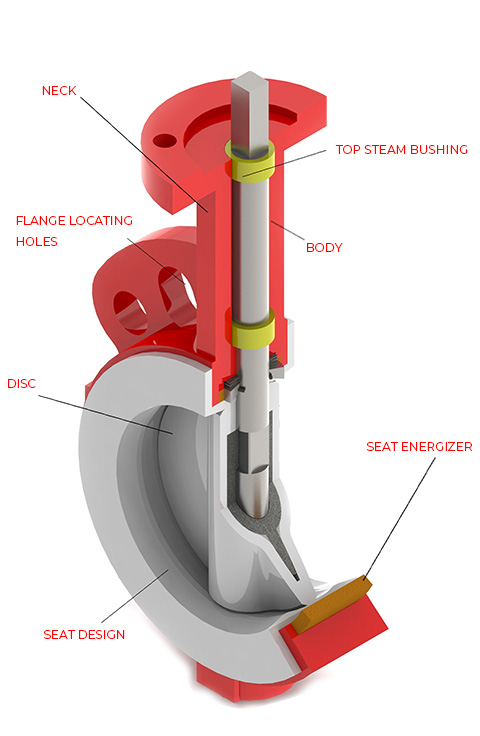 How Does Butterfly Valve Work?

Butterfly valves primarily act as control valves. A thin disc in the middle moves sideways when it is time to open the valve; it is perpendicular to the bore and the stem moves in the same way as the disc.

The size of this disc is almost the same as the inside diameter of the pipers. When the valve closes, the disc and the stem moves sideways again. Throttling happens when the flow control part of the valve is partially open.

There are times when valves do not perform at their optimum rate even if it is relatively brand new. Why is this so? The answer lies in the knowledge and application of these valves. Understanding these considerations are part of lengthening the life of such valves.

Perhaps this is the most important consideration. Knowing the type of medium narrows down the suitable valves to use. Furthermore, understanding corrosiveness or the amount of slurry trapped in the valve cavities are part of the considerations. That being said, mediums with high viscosity are not suitable with butterfly valves.

Valves should be able to handle the weight of the piping system; otherwise, the valve may experience high bending load, which then results in leakage and internal valve damage.

The material of the valve body, disc, and seat should be able to withstand the corrosiveness of the passing medium. Another fact to consider is the concentration of acids if acid is indeed the flow media.

With this in mind, there are some kinds of acids that, when diluted with, become more corrosive. Understanding industry standards help in deciding what valve to use.

The two common body designs for butterfly valves are lug type
and wafer type. These refer to the mounting schemes generally
used by butterfly valve manufacturers.

The wafer type is an economical option for butterfly valves. In detail, O-rings and gaskets seal the pipe valve to the pipe flanges. Bolts connect the valve to the pipe flanges. There may be flange holes in the body; however, this is not a standard since other designs don’t have these. This connection is more suitable against bi-directional differential pressure and for systems that are more susceptible to backflows. 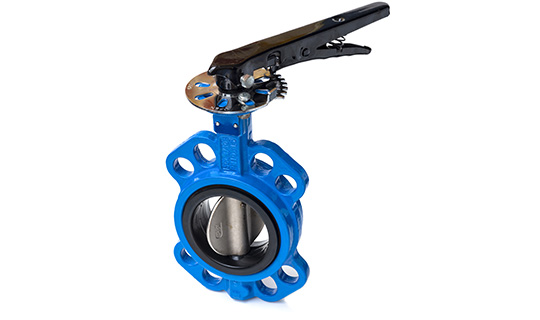 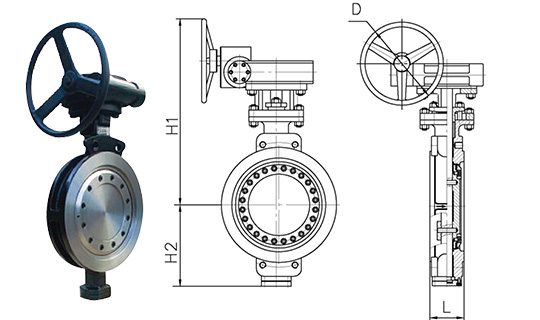 This type of design has lugs attached to the valve body. Dead end connections are the common uses for this type of butterfly valve.

This kind of classification is based on the location of the stem,
the disc, and the seat surface angle. 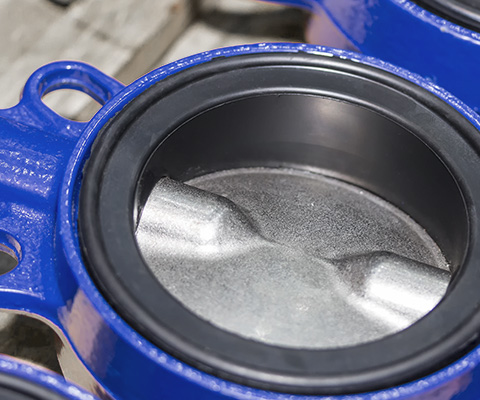 Since the disk and the seat are always in contact, the body of the valve is less prone to corrosion as the media flows. It only touches the seat that acts like a sleeve.

The stem passes the center back side of the disk and attached to the center bore. Otherwise known as the single offset butterfly valve, the design prolongs the lifespan of the valve. In order to do so, the disc and the seat have less contact before the valve closes. 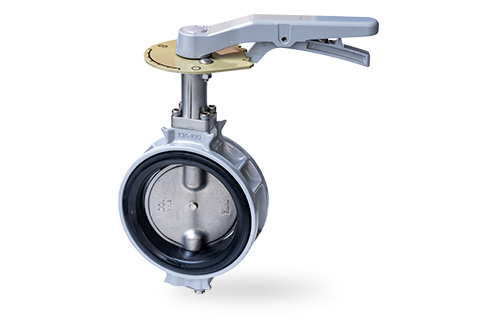 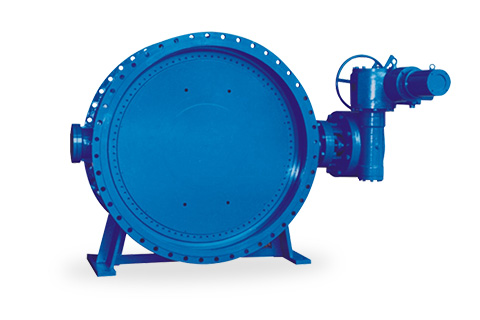 While there is a limitless number of materials to make butterfly
valves, one can narrow down the most common into two.

Plastic butterfly valves have been on the rise as it is cost-effective. They may be lightweight but this type of material still possesses strong structural capabilities, making them ideal for applications that have low to moderate pressure. Compared to the metal material, PVC does not react to most fluids and gases.

There are two methods of operating butterfly valves. The manual method employs either a gear wheel or lever. Automation is the other mode of operation.

The gear wheel is actually a combination of the gear and the wheel-like contraption that rotates only a quarter to open or close the valve. This is then attached to the stem so it can move the disc located inside the valve.

The other manual method of opening and closing the gear is the lever method. Often with a locking mechanism, the lever-type is the most practical but most often than not, unsuitable for larger operations as it needs more force. It has a wrench-like extension that moves left or right to open or close the disc.

Most often used in industrial applications, automation of the actuator is best suited for valves with larger dimensions. Automation of actuators can be one of the three types below.

An electric motor aids the opening and closing of the valve.

With the help of the hydraulic pressure is applied to the piston, the valve either opens or closes.

Compressed air aids the gear to open or close the valve.

Butterfly valves and ball valves are two of the most commonly used quarter turn valves. Both are popular in industrial applications; however, there are few differences.

Compared to ball valves, butterfly valves are more inexpensive and easier to install. However, the butterfly disc is the giveaway. Cleaning would take some effort due to the design. In terms of the capacity to carry high pressure and temperature, ball valves have an edge over butterfly valves.

Send us a message if you have any questions or request a quote. Our experts will give you a reply within 24 hours and help you select the right valve you want.