How Does a 3-Way Ball Valve Work? 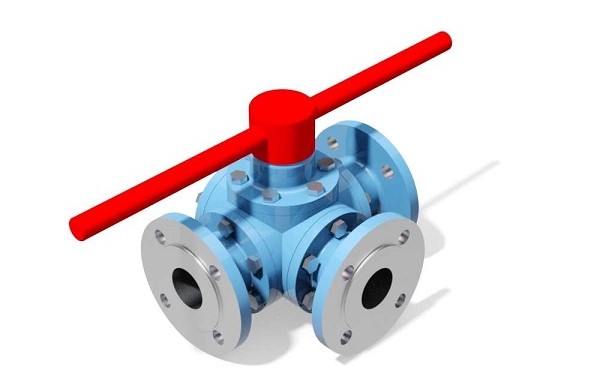 Multiport ball valves, such as the 3-way ball valve, provide numerous solutions for process control applications. These valves offer more flexibility when the application deals with more than one media. However, multiport valves can be a little confusing for someone who has not used it before. Before you learn about 3-way ball valve, make sure you figure out what a common ball valve is.

What Is a 3-Way Ball Valve?

Ball valve suppliers have to come up with ball valve designs that can address multiple processes without having to install more than one valve. Hence, multiport ball valves were developed. 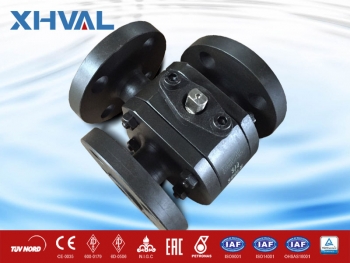 There are two different types of 3-Way valves with actuators to manage different flow paths – L-port and T-port. The ball valve is manufactured in a specific design to create either the L or T shape.An L-Port can send flow one way or the other or turn it entirely off.

A T-Port performs all of the same flow tasks as an L-Port, except it cannot be turned off. Furthermore, the T-Port can mix flows by delivering and receiving flow to and from both sides of the Tee. Xhaval offers 3 way ball valve catalog classic designs with modern innovations.

A three-way valve has three openings which can act as an inlet and outlets at one time. The main advantage of this valve is its economic value as it can both act as a control and shut-off valve.

Advantages of the 3-Way Ball Valve

Piping set-up plays a major role in flow control using this kind of valve. Additionally, how the valve is designed also determines the flow pattern. That being said, there are two kinds: the Y-pattern and the L-pattern.

#1. It can totally shut off the valve.

#3. It can divert the flow of media in another direction.

#4. It can split the flow of media into two separate directions.

#5. It can block the flow of one media and allow another media to flow in the same direction.

Three-way ball valves can either have the L-pattern or the T-pattern. While the working is still the same, the ball configuration for these two is quite different. 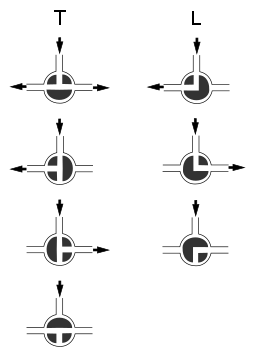 The L-pattern ball valve is characterized by a port located in the middle aside from the two ports located at opposite ends.

The L-port design directs flow in only one direction at a time. Flow can be directed into two distinct exits from a single intake. In the opposite flow direction, the user can select either of two inlets for one output.

The T-pattern type is sometimes called the mixer or the 180-degree ball valve. T-Port Ball valves can also be used to direct flow between two ports to the left, right, or straight through. Because you can combine two inlets into a single exit, it’s ideal for mixing fluids. (Also known as Mixing Ball Valves) The opposite flow direction is also conceivable, allowing a single source to divert flow in both directions at the same time.

A 3-way ball valve operates by rotating the handle, which spins a ball within the valve body, to line the cut-out channels in the ball with the valve’s inlets and outputs. An L-port valve’s “L” shaped cut-out of the ball delivers fluid through 90 degrees from one port to another.

What Is A T Port 3 Way Ball Valve

A separate valve must be added to the two opposite branches of the tee to shut off all flows on a T-port 3-way valve. To stop the flow, close the two valves and turn the ball in the 3-way valve to face the back of the valve. On each branch, a tee piece with a single valve is a better solution.

The 3 way hydraulic ball valves serve a variety of functions in the oil and gas industry:

The L-port, L-pattern valve allows fluid to be directed to a common outlet from two different inlet ports without ever using the same inlet port. They have two inlets and a single outlet. In some applications, L-port valves can provide fluid diversion service.

What Is A L-Port 3 Way Ball Valve

A three-way ball valve is a type of valve that has three ports, also known as apertures. The connection between the ports features a metal ball with apertures to adjust the flow direction of the media. Fluid or gas (media) flows through the valve, and a mechanism turns the ball, directing flow from one location to another.

A 3-way ball valve is a valve with three ports, often known as apertures. The connection between the ports has a metal ball with apertures to adjust the flow direction of the media. Fluid or gas (media) flows through the valve, and there is a mechanism to turn the ball, which directs flow from one location to another.

A 3-way ball valve is a valve with three ports, often known as apertures. The connection between the ports has a metal ball with apertures to adjust the flow direction of the media. Fluid or gas (media) flows through the valve, and there is a mechanism to turn the ball, which directs flow from one location to another.

The 3-Way Ball Valve Mixing Station is a chemical proportioner that properly dilutes three chemical concentrations to the necessary ratios and fills any sized container with diluted, ready-to-use chemical solutions.

A 3-way control valve stops water flow in one pipe while allowing it to flow in another. The valve can also combine water from two distinct pipes into one pipe or redirect water from one pipe into two different pipes in a modulating or three-point floating application.

Since there are two kinds of 3-way ball valves, this section discusses each of the mechanisms in detail. They are a bit different from common ball valve mechanism. The L-pattern type or the diverter valve allows the change of flow from one port to the other through the turning of the handle or actuator to 90-degrees.

Assume that the first position has the bottom port and the left port open. A quarter turn in the counterclockwise direction makes the valve divert the flow of media to the right port.

Another quarter turn in the opposite direction, making the entire rotation 180 degrees in total, blocks the flow of media as can be seen in the image above. A 270-turn would still block the flow of media. However, making the full 360-turn allows the valve to return to its original position.

In a sense, two of the three ports open at one time. This allows the valve to have two shut-off positions with three flow options.

The T-pattern is called the mixer valve because the media from two inlet flows can be combined inside the valve. It then exits to the other end. In a sense, all three ports can be opened at one time.

The T-pattern ball valve can also act as a diverter so it can also work similarly that of the L-pattern. All these are done with a quarter-turn of the handle. T-pattern cannot provide a bubble-tight shut-off but they can limit the flow to two ports or allow passage to all three ports.

As a mixer, the T-pattern ball valve can split the media to flow out from 2 opposite directions. The design allows the T-pattern to split the flow or just allow a straight-through flow pattern, just like the two-way ball valve.

For a vertically positioned T-pattern ball valve, the common port is always open. The only way that flow diverts is by turning it a quarter turn. A 180-turn will not change the flow of the media.

There are locking handles so the valves can move with a turn of the handle; however, these locks are in intervals up to 360 degrees for the 3-way valve. This is to compensate for the number of ports. Also, the port that acts as the common entry point is often located at the bottom of the valve.

The Importance of Handles

Generally speaking, ball valves have handle stops that prevents the ball valve from exceeding the 90-degree turn. This is particularly important to three-way valves because of the number of openings of the ball disc inside the valve. By providing a limited set range of motion to the handles gives more control to the amount of media that must be diverted or combined.

How Does It Differ from Two-Way Ball Valve

The two-way ball valve is primarily shut-off services. This has two openings on both which are connected to the pipes. This valve has a single straight hole through which the media passes through.

On the other hand, three-way ball valves have three connections or port. This valve is suitable for more complex control processes that the two-way variant cannot accomplish. While the two-way is more of a shutoff valve, multiport ball valves such as the three-way type provides control of media flow.

Ball valves are one of the most versatile industrial valves in the market. If you want to know more about these valves and how these can help your business, contact XHVAL for more details. Or you can also get the great manufacturers in this complete valve manufacturers guide in China.