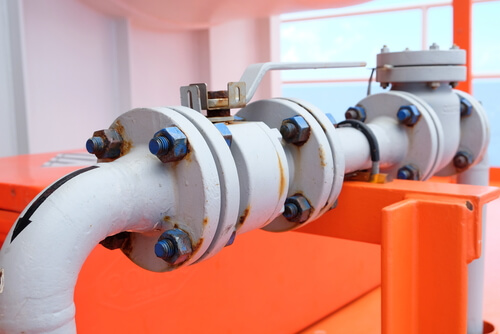 Ball valves are one of the valve types most widely used in different industries. The demand for the ball valve is still growing. Have you ever wondered how ball valves make impact to your applications.In this article, you will learn about the common components of a ball valve and their functions. What’s more, we will show you how a ball valve works to help you better understand it before you have one for your applications.

What is a Ball Valve?

As its name suggests, the ball valve has a ball-like disc that acts as a barrier when the valve is closed. Ball valve manufacturing companies often design the ball valve to be a quarter-turn valve but it can also be a rotatory kind when it controls or diverts the flow of media.

There is also a growing need for ball valves as the world seeks more alternative sources of energy. Apart from China, ball valves can also be found in India. There is no denying the importance of such valves in any industrial piping systems. But, much is to be learned about ball valves, and you should know it before you use it. This article will help you understand ball valves more so you’d learn whether these are suitable for your applications.

What You Should Know about Ball Valves

One of the most commonly used industrial valves, ball valves are often employed in tight shut-off applications. The ball valve got its name from the hollowed-out sphere component that allows media passage when it opens or blocks it when closed. These are members of the quarter-turn family of industrial valves.

The ball valve is often used in many industries so it’s not surprising to find that its demand is high. Nowadays, you can find high quality made in China ball valves or ball valves manufactured in India. 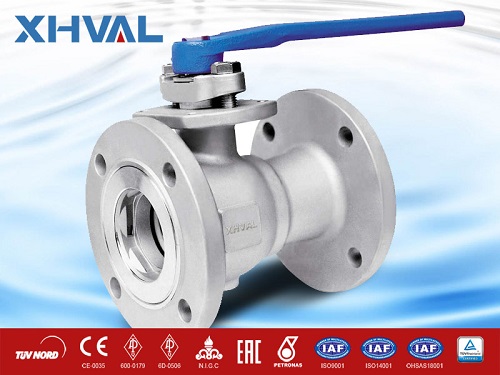 Many ball valve types share the same features as mentioned below:

# Valve stops – this allows only a 90-degree turn

# Anti-static – this prevents static electricity buildup that can cause sparks

# Fire-safe – a secondary metal seat is built to act as supplementary seats in high-temperature applications.

Advantages and Disadvantages of the Ball Valve

Ball valves are great to use when the system needs a quick opening and closing. These are also advantageous in applications where it needs a tight seal without having to consider high internal pressure.

However, ball valves have limited throttling capacities. In fact, these are not recommended for regulating media flow. Ball valves have partially exposed seats, which can erode quickly when slurries are used. These are also hard to open quickly and manually when pressure is high.

Ball valves come in different materials. Depending on the nature of the application, ball valves are often forged or cast using iron, stainless steel, and other steel alloys. Ball valve seats can be made of an elastomeric material such as PTFE or metal, often stainless steel.

Although there are several variants of the ball valve, there are five common components present in all ball valves as seen in the diagram below: 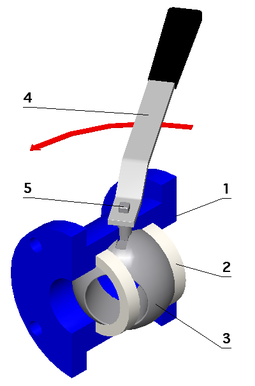 The body holds all the components together

The seat seals the valve during shut-off

The ball allows or blocks the passage of media.

The actuator or lever moves the ball so the latter can open or close.

The stem connects the level to the ball.

Ball valves are actually classified in several ways. You might encounter valve groups based on the number of components or the type of ball valves have.

You can classify ball valves depending on the number of components their bodies have. The cheapest among the three, the one-piece ball valve is made of a single block forged metal. This can’t be disassembled for cleaning or maintenance. One-piece ball valves are suitable for low-pressure applications.

On the other hand, the two-piece ball valve is made of two pieces connected by threads. This type should be completely removed from the pipeline while being cleaned or replaced. Lastly, the components of the three-piece ball valve are connected via bolts. Maintenance can be done on the valve even if it is still attached to the pipeline.

Based on Disc Design

The design of the ball is a major classification for ball valves. Aptly named because the ball is suspended at the top of the stem, the floating ball valve is the most common design of this category. As it closes, the ball moves towards the downstream opening. The pressure load helps seal the valve tightly.

Based on Pipe Diameter

The full bore type types have the same diameter as that of the pipes. The advantages of this type include no pressure loss and easier cleaning. Full bore ball valve are more expensive because of the size of the valve. Lastly, The V-shaped type has a V-shaped hole which enables precise fluid control whenever the valve is open.

What Are Ball Valves Used For 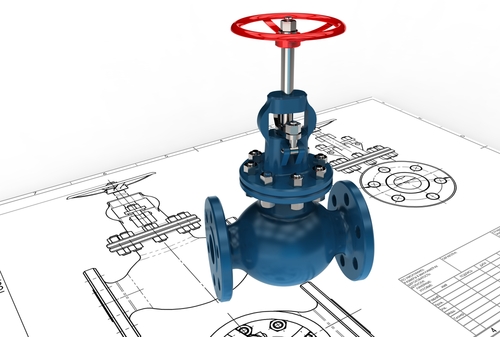 Ball valves are often found in a wide variety of applications. Most often, you would find them in flowing systems on ships, corrosive services and fire safe protection services. These are not used in applications where contamination is an issue such as those in the food processing services. Ball valves are difficult to clean.

Ball valves are often used in applications that require tight sealing. They are known to have low-pressure drops. Its 90-degree turn makes it easy to operate even if the media has high volume, pressure or temperature. They are quite economical because of their long service life.

Parts of a Ball Valve

There are many ways to classify valves. Be as it may, there are seven valve components common to all valves.

The body is the framework of the entire ball valve. It acts as a barrier to the pressure load from the media so there is no transfer of pressure to the pipes.  It holds all the components together. The body is connected to the piping via threaded, bolted or welded joints. Ball valves can be classified according to the type of body, often cast or forged.

This is the gasket that helps seal the bonnet and the stem. Many of the issues happen in this area so proper installation is important. Too loose, leakage happens. Too tight, movement of the stem is restricted.

The bonnet is the covering of the valve opening. This acts as the secondary barrier for pressure. The bonnet is what holds all the internal components together after these are inserted inside the valve body. Often made from the same material as the valve body, the bonnet can either be forged or cast.

This is the disc of the ball valve. Being the third most important pressure boundary, the pressure of the media acts against the disc when it is in the closed position. Ball discs are often made of forged steel or any durable material. Ball disc can either be suspended like in case of the floating ball valve, or it can be mounted like that of the trunnion-mounted ball valve.

Sometimes called the seal rings, this is where the ball disc rests. Depending on the design of the ball disc, the seat is either attached or not to the ball.

Actuators are devices that create the rotation needed by the ball valve to open the disc. Oftentimes, these have a power source. Some actuators can be remotely controlled so valves still work even if these are located in remote or hard to reach areas.

Actuators can come as handwheels for manually operated ball valves. Some other types of actuators include solenoid types, pneumatic types, hydraulic types, and gears.

Generally speaking, the ball valve working mechanism works this way. Whether it is manually or actuator operated, some force moves the lever or handle to a quarter turn to open the valve. This force is transferred to the stem, moving the disc to open.

The ball disc turns and its hollowed side faces the flow of media. At this point, the lever is in the perpendicular position and the port to parallel in relation to the flow of media. There is a handle stop near the connection between the stem and bonnet to only allow a quarter-turn.

To close the valve, the lever moves back a quarter turn. The stem moves to turn the ball disc in the opposite direction, blocking the flow of media. The lever is in the parallel position and the port, perpendicular.

However, take note that there are three kinds of ball disc movement. Each of these has different working operations.

How Does a Three Way Ball Valve Work

How Does A Floating Ball Valve Work

The floating ball valve has its ball disc suspended on the stem. There is no support at the bottom part of the ball so the ball disc partially relies on the internal pressure for the tight seal ball valves are known for.

As the valve closes, the upstream linear pressure from the media pushes the ball towards the cupped downstream seat. This provides a positive valve tightness, adding to its sealing factor. The downstream seat of the floating ball valve design carries the load of the internal pressure when the valve is closed.

How Does A Trunnion Ball Valve Work

The other kind of ball disc design is the trunnion mounted ball valve. This has a set of trunnions at the bottom of the ball disc, making the ball disc stationary. These trunnions also absorb the force from the pressure load when the valve closes so there is less friction between the ball disc and the seat. Sealing pressure is performed in both upstream and downstream ports.

When the valve closes, spring-loaded seats move against the ball which only rotates in its own axis. These springs push the seat tightly to the ball. Contrary to floating ball valves, trunnion-mounted ball types are suitable for applications that don’t need high pressure to move the ball to the downstream seat.

Lastly, the rising stem ball valve utilizes the tilt-and-turn mechanism. The ball disc wedges to the seat when the valve closes. When it opens, the disc tilts to remove itself from the seat and allow media flow.

What is a Ball Valve Used for?

Understanding how the ball valve works means you can make intelligent decisions whether these valves are suitable for your needs. If you need to know more about ball valves, connect with XHVAL Industiral Co. Or you can also get the great manufacturers in this complete valve manufacturers guide in China.

Ball valves are evolving together with the industries these are associated with. Being buyers, educating oneself about what ball valve is important. Or you can also get the great manufacturers in this complete valve manufacturers guide in China.